Bullish SAP gains ground on Salesforce and Oracle in the cloud

Investors welcomed the results, with SAP shares gaining 2.7 per cent in early trading 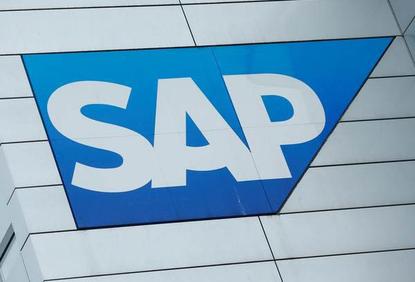 SAP has announced upbeat results in the seasonally tough first quarter, saying it was gaining ground on competitors Salesforce and Oracle in the cloud and that its margin recovery was firmly on track.

Europe's largest tech company by stock market valuation also raised its sales and profits guidance for 2018 to take into account the US$2.4 billion acquisition of U.S. sales software firm Callidus that was announced in January.

Investors welcomed the results, with SAP shares gaining 2.7 per cent in early trading - even as hardware-focused tech stocks suffered in Europe on growing signs that Apple's latest iPhone is underperforming.

SAP now expects total non-IFRS revenues at constant currencies this year of US$30.3-$30.9 billion, representing growth of 5.5-7.5 per cent, up from an earlier expectation of 5-7 per cent growth.

McDermott, a hard-driving New Yorker who is Germany's highest-paid CEO, is leading SAP through a transition away from selling software licenses that generate up-front fees to hosted cloud services paid for by subscription.

Yet its cloud business, where quarterly revenues for the first time topped one billion euros, is still just a third the size of the legacy license operation and must grow rapidly for years to come to achieve comparable scale.

The key growth metric watched by analysts, non-IFRS cloud revenues at constant currencies, came in at 31 per cent - clearing a 30 per cent threshold set by Deutsche Bank ahead of the results as a 'buy' signal for the stock.

"SAP's performance at constant currency was quite remarkable, keeping in mind the tough comps from last year in mind," Baader Helvea analyst Knut Woller said in a flash note.

McDermott, with the Callidus deal, is beating a path from the back office - SAP's traditional domain - to outward-facing functions such as customer relationship management (CRM).

He told reporters SAP would introduce a new strategy for sales and marketing tools at its annual customer conference in June.

"Our resolve has never been stronger to retake the CRM marketplace," McDermott told reporters, referring to Salesforce's core sales and marketing software franchise.

SAP has faced currency headwinds due to the strong euro, and both the company and analysts focus on key metrics after adjustment for currency effects to get an underlying picture of performance.

Had SAP reported in U.S. dollars, like its competitors, the growth numbers would have turned out even better, said CFO Luca Mucic.

Cloud subscriptions, for example, would have shown year-over-year growth in the first quarter of 37 per cent in U.S. dollar terms, he said.

Salesforce reported cloud subscription and support revenue grew 25.8 per cent to US$2.66 billion during its fourth quarter ended in January.

Oracle posted 33 per cent growth to US$1.15 billion in its cloud software-as-a-service (SaaS) revenues during its third fiscal quarter ended in February.

Salesforce said it had 19.9 per cent of the worldwide market for CRM applications in the first half of 2017, citing data from market research firm IDC.

SAP's cloud growth accelerated outside the United States, with Germany and, to a lesser extent Britain, being highlights in Europe. In Asia, China and Japan stood out.

Mucic said that an expansion of 1.1 percentage points in operating margins in the first quarter boded well for SAP after a strong showing in the same quarter a year ago.