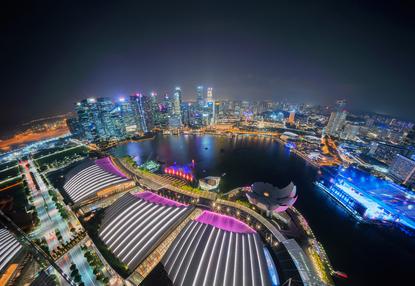 During the 32nd ASEAN Summit which took place in March this year, Singapore’s Prime Minister Lee Hsien Loong proposed an ASEAN Smart Cities Network initiative (ASCN) - a proposal which was approved by all members of the bloc.

ASCN is envisioned as a collaborative platform where 26 cities from the ten ASEAN member states work towards the common goal of smart and sustainable urban development. The primary goal of the ASCN is to improve the lives of ASEAN citizens, using technology as an enabler.

Although most of the cities on this feature still have a way to go until they can achieve the full status of smart cities, there’s a strong determination to make this happen sooner than later, as the ASCN demonstrates.

Here we look into 10 cities of the Southeast Asian region which are already or are in the process of becoming smart cities. Apart from New Clark City in the Philippines, all feature in the ASCN initiative.

For this list we have used research from GovInsider, The ASEAN Post, The Economist Intelligence Unit (EIU) and the ASCN project profiles.

Hanoi has been working on its smart city planning since 2016. With a population of 7.6 million, Vietnam’s capital aspires to be a green, culturally-rich, civil and modern city with sustainable development to create a better life for its inhabitants by 2030.

A thriving city, Hanoi has one of the fastest gross domestic product (GDP) growth indexes in the world.

On the technology front, Ericsson affirms that the country will be adopting 5G within two years, something which would give a huge push to the development of Hanoi’s smart city infrastructures.

Hanoi’s Smart City Action Plan includes the establishment of a Smart Operations Centre which will contain a number of functional hubs, including a support centre for the city’s IT staff, a data analysis centre and a centre for traffic supervision, traffic control and crime prevention.

In the education sector, 2,700 schools and universities are being integrated into an online system where school reports and enrolment data can be easily accessible online by students and teachers.

And when it comes to transportation, the city is working on a digital traffic map to ease traffic congestion. Hanoi, together with Ho Chi Minh City, is using the iParking app in some districts. Thanks to this app, drivers can find free parking spaces and pay from their smartphones easier and quicker.

No top smart cities list would be complete without Singapore on it.

Ranking an impressive sixth position in the top world smart cities 2018 index by the IESE Business School in Barcelona, Singapore is at the forefront of the digital economy, digital government and digital society.

Singapore is ahead of major global cities such as New York, San Francisco or London, and with its autonomous vehicles, smart sensor platform and use or artificial intelligence (AI), there’s barely a day when the city-estate doesn’t make headlines in technology news.

One of the elements which places Singapore ahead of its neighbours when it comes to smart city development is the government’s strong commitment on tech-friendly legislation and a massive investment in its smart city infrastructure.

According to IDC data, Singapore leads the way in government IT spending among ASEAN countries.

As part of its smart city development, Jakarta has launched Qlue - “the smart city app”.

Qlue is a social media app which allows users to report problems directly to the local government and businesses, as well as sharing information with other citizens.

Reports sent through Qlue are dispatched in real time to the relevant local authorities. Each report status can be monitored using the app and Qlue’s Dashboard online.

One of Jakarta’s future smart city projects is the development of OK OTrip, an integrated transit cashless payment system. The project consists on integrating all of the city’s transport payment systems into one cashless platform to improve urban mobility, enhance modal share and reduce travel time, while keeping travel affordable.

Twenty-six per cent of respondents to a survey by The Economist rated Kuala Lumpur as already being a smart city.

Among the governmental initiatives to make the Malaysian capital smarter is the outlining of the Greater Kuala Lumpur area as one of the twelve National Key Economic Areas of the Economic Transformation Programme (ETP).

The main objective of the ETP is to transform the city by using technology and developing digital skills and related areas towards smart city development.

In 2016, Kuala Lumpur’s City Council was named finalist in IDC’s Smart City Asia Pacific Awards (Scapa) in the Public Works category due to its Heavy Vehicle Classification System (HVCS) initiative, which was implemented to address traffic problems during peak hours.

Kuala Lumpur envisions to be a world class sustainable city by 2020 through the implementation of ten strategic targets, among which are achieving energy efficient spatial structure, sustainable energy system and increasing the share of green employment by four per cent.

Myanmar’s last royal capital and its second largest city - after Yangon - with 1.25 million people has experienced rapid urbanisation and population growth in the recent years.

To promote itself as a smart and green city, the Mandalay City Development Committee (MCDC) and the Department of Human Settlement and Housing Development (DHSHD) have prepared their first major 25 year urban development plan.

The Asian Development Bank (ADB) and the French Agency for Development (AFD) are providing technical and financial support to help the city achieve its vision through the Mandalay Urban Services Improvement Project, which aims to improve the city’s water supply system, wastewater treatment and solid waste management.

In addition to the above initiatives, the International Environmental Technology Centre (IETC) of the United Nations Environment Programme (UNEP) has also been providing technical assistance for developing a waste management strategy to help the city achieve a zero waste, zero emissions and a resource-efficient society.

Mandalay is already seeing the benefit of implementing technology on its streets: Internet of Things (IoT) sensors are being used in the city to help officials keep track of water issues; drones are helping to map the city to plan drainage systems; and traffic congestion is monitored and planned through automated control centres.

However, as Chief Smart City Officer Ye Myat Thu points out, Mandalay still needs to work on its infrastructure in order to unleash its full potential as a smart city.

In November 2017, Prajin Juntong, Deputy Prime Minister of Thailand, announced that his country has set a target to develop 100 cities within two decades as part of its Thailand 4.0 initiative - a plan to transform the nation’s economy into a digitally powered ecosystem.

Phuket is one of the three cities taking part in the smart cities pilot project which started in 2016 - the other two being Chiang Mai and Khon Kaen.

The Thai government has injected US$13 million - and a possible addition of US$30 million in the coming years as the project expands - to the island’s pilot programme and is expected that it will make Phuket’s economy grow by 4.5 per cent in the next five years.

An arcadian paradise for tourists around the world, TripAdvisor ranks Phuket as the second top 25 destination in Asia.

The Digital Economy Promotion Agency (DEPA), which is working with the government to create smart cities in Thailand, chose Phuket as the first city to lead the initiative because of its reputation of being one the biggest tourist cities in the world and also because of the existing technology infrastructures.

So far the Thai government has been employing big data analytics to keep track of and improve tourism delivery services. For that, it has leveraged on several startups, companies and events like hackathons to study the various types of tourists that visit the island annually.

Mayor of Makassar, Mohammad Ramdhan “Danny” Pomanto, wants to make his city the smartest in Indonesia.

Under the motto “Sombere [kind hearted] and Smart City”, Makassar is combining technology and local wisdom to offer a sociotechnical solution to the city’s development.

The city is also developing a public transport system called Petepete Smart, consisting of a modern float of mini-buses equipped with WiFi, GPS, air conditioning and a capacity of 12 seated passengers, 4 stands, and 1 passenger with a disability. The vehicles can be monitored centrally through a command centre.

In 2016 Makassar partnered with the Singaporean government to build smart city solutions and digital services.

Mayor Pomanto also wants to collect data to cut traffic congestion and persuade motorbike riders to use public transport instead.

Vietnam’s fifth largest city, Danang aims to have a smart ICT infrastructure and key databases by 2020 and achieve a fully smart, liveable and sustainable city status by 2030.

According to an EIU survey, 84 per cent of Danang’s residents consider their city smart today, citing improvements to the environment as the main benefit.

This is reflected in practice as Danang seeks to develop into an environmentally-friendly city within two years by raising awareness and enhancing local environmental protection and urban management, in part by working closely with industry.

Several international companies have also been involved in the city’s ongoing infrastructure development efforts in electricity, telecommunications, fibre optic cables and cloud-based solutions, among other areas.

Other initiatives include the launch of free public WiFi and the country’s first ever e-government platform in 2014.

The system hosts 1,196 online public services and 498 other services covering the issuance of certificates for land use, management of public infrastructure like roads, water quality and drainage as well as the issuance of driving licenses.

Thailand’s capital and largest city still relies heavily on cars as the main way of transport, making traffic and pollution one of its most pressing problems.

As part  of its smart city action plan Bangkok is focusing on building an infrastructure and achieve a quality environment that could ease its transport issues.

Plans are underway to grow Bangkok’s still nascent network of public transport so that 60 per cent of the city’s residents could rely on public transport for their daily commute as opposed to just the 40 per cent that do it today. The rapid rail network in the greater Bangkok area is also set to expand to more than 500 kilometres by 2029.

In terms of sustainable living conditions, the One Bangkok “city-within-a-city” district will be an integral part of the smart city development. It will be driven by elements of IoT spanning an area of 16.7 hectares.

With eight hectares dedicated to green and open spaces, the project is set to be a prime example of people-centric and environmentally sustainable smart city living.

When it comes to energy efficient buildings, Bangkok is home to the Park Ventures Ecoplex, which houses the Okura Prestige Hotel in the capital’s Central Business district. The hotel is the first building in the city to be accorded the Leadership in Energy and Environmental Design (LEED) platinum rating.

100 km north of Manila, in the province of Tarlac, there’s a planned community which started to be built in 2016: New Clark City.

The smart city project is planned to be a high-tech green city with autonomous vehicles, drones and robots, making it the first of its kind in the Philippines. It’s expected to alleviate the congested capital of the country and set a precedent for future smart cities.

According to its lead developers, the project is mainly funded through public-private partnerships. The project is expected to house up to two million people and contribute US$30 billion to the Philippines’ economy on an annual basis.

“New Clark City has tremendous potential, and we are committed to be long-term partners in the city’s growth,” said Surbana Jurong Group CEO, Wong Heang Fine.

Surbana Jurong is a Singapore-based urban, industrial, and infrastructure consulting firm that signed an agreement with the Philippines’ Bases Conversion and Development Authority (BCDA) and Japan Overseas Infrastructure Investment Corporation for Transport and Urban Development (JOIN) to develop the city.