Meg Whitman was happy to throw Apotheker 'under the bus'

Expresses anger towards the handling of botched Autonomy deal 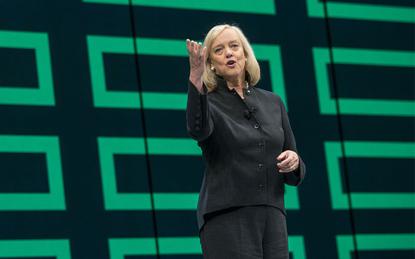 Former boss of Hewlett-Packard, Meg Whitman revealed she was happy to throw her predecessor Leo Apotheker "under the bus" in a moment of anger over the botched acquisition of British software company Autonomy, London's High Court heard on Wednesday.

The US executive was giving her testimony into the US$5 billion trial of Mike Lynch, whom HP accuses, along with his former colleague Sushovan Hussain, of inflating the value of the big data firm before selling it to HP in 2011 for US$11.1 billion.

Lynch has denied the allegations and said the failure of the acquisition was down to HP's mismanagement and neglect of the company during Whitman's tenure.

Apotheker, the architect of the deal, was fired by HP's board just weeks after it was announced as part of a huge shake-up which also included the possible sale of its PC business. Whitman, a non-executive director on the board, said she had to be persuaded to take the job of CEO.

Little over a year later, after sacking Lynch, Whitman had written down the value of the acquisition by US$8.8 billion.

She said in an email dated 14 Dec 2012 to HP's chief communications officer Henry Gomez: "Happy to throw Leo under the bus in a tit-for-tat" after Apotheker had said the HP board should share the blame for the failed deal.

Asked by Lynch's counsel Robert Miles whether she was just protecting herself, Whitman said that was "absolutely not the case". "It was a moment of disappointment and anger," she said. "I shouldn't have said it."

Miles said that was exactly what she did to Lynch, a charge she denied.

A spokesman for Apotheker said: "HP's acquisition of Autonomy had the full support of the HP board of directors, who endorsed it unanimously on the basis of thorough due diligence.

"The fact that every member of the board stood behind the transaction at the time it was announced is clear from the proceedings in the high court."

In sometimes testy exchanges, Miles questioned Whitman on the synergy value HP believed it could generate by combining Autonomy's technology with its existing assets - a number that in large part justified the deal premium - and on whether Autonomy fitted into her own strategy for HP.

Whitman, a technology leader who grew eBay into an US$8 billion revenue company, said Apotheker and CTO Shane Robison led the push to buy Autonomy but the board had approved it, and they later "felt awful" about it.

The deal was announced on 18 August 2011 as part of a huge shift that included exiting its tablet business, exploring the sale of its PC unit and disappointing quarterly results.

"There was a fair amount of investor push back after Autonomy was announced," Whitman said.

She told the court that her priority was stabilising the core business - which was in a more precarious state than she had feared - and reassuring customers and investors that the company was not going to ditch hardware completely.

But she denied that Autonomy was neglected. "We really wanted Autonomy to be successful," she said. "We were committed to Autonomy but we had to stabilise the core assets."

She said Lynch, who reported directly to her, received more of her attention in fixing problems than almost anyone else.

However, in her witness statement, she said Lynch had failed to tell her that Autonomy was on track to miss quarterly revenue targets and his management style hampered rather than helped Autonomy's integration.

She said she was not surprised Lynch recalled a telephone call in which she told him and other Autonomy leaders that "the fun is over and it's time for Autonomy to grow up".

Her point, she said in the statement, was Autonomy needed to be managed as part of a much larger organisation and not as a start-up.