Spending on Google Cloud and Azure services up by at least half, but AWS still leads the pack. 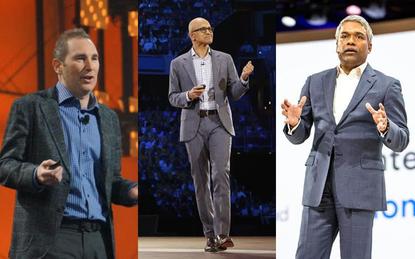 The digital transformation driven by the COVID-19 pandemic has pushed global spending on cloud infrastructure services to hit a first quarter record, growing 35 per cent to US$41.8 billion for the first three months of the year.

This is according to research firm Canalys, which claimed that this was the first time quarterly spending surpassed the US$40 billion mark during any given Q1.

The demand for these services, the firm claimed, stemmed from the acceleration of digital transformation over the past 12 months, including working practices, customer engagement, business processes and supply chain dynamics.

Confidence in multi-year contracts is also on the rise, due in part to economic recovery, COVID-19 vaccination programs and restriction easing, in addition to the acceleration of digital transformation projects.

Of the major vendors, Amazon Web Services (AWS) held onto its top spot once again, growing by 32 per cent on an annual basis during the quarter and making up 32 per cent of the total services spend in the period. However, Google and Microsoft reported some bumper cloud growth during the quarter. Google Cloud grew by 56 per cent for the period, year-on-year, while Azure was up by 50 per cent.

According to the firm, Google Cloud’s success came from its ‘Google One’ approach to drive cross-sell and integration opportunities through its portfolio.

In addition, cloud-native development and accelerated cloud migration in its customer base has been bolstered by industry-specific solutions, machine learning, analytics and data management. However, it still only makes up seven per cent market share.

Azure’s growth, meanwhile, came from cloud consumption and longer-term customer commitments through investments in offerings such as Azure Arc for hybrid-IT control plane management, Azure Synapse for data analytics and artificial intelligence (AI) as a platform.

During the quarter, Microsoft also launched its industry specific cloud offerings for financial services, manufacturing and nonprofit sectors. While it doesn’t have AWS’ clout, Azure fared better than Google Cloud in terms of market share, making up 19 per cent of all spending for the quarter.

One way these major players could differentiate themselves moving forward, Canalys chief analyst Matthew Ball claimed, is through expanding their reach into new regions.

“Geographic expansion for data sovereignty and to improve latency, either via full-region deployment or a local city point of presence, is one area of focus for the cloud service providers,” he said. “But differentiation through custom hardware development for optimised compute instances, industry-specific clouds, hybrid-IT management, analytics, databases and AI-driven services is increasing.

“[It] is not just a contest between the cloud service providers, but also a race with the on-premises infrastructure vendors, such as Dell Technologies, Hewlett Packard Enterprise and Lenovo, which have established competitive as-a-service offerings. The challenge will be demonstrating a differentiated value proposition for each.”

Moving through 2021, customer confidence is predicted to keep rising, with postponed projects expected to resume and new projects to crop up, according to Canalys research analyst Blake Murray.

The channel to benefit from the $4.6 billion APAC edge opportunity