The Chinese telco equipment vendor already has a stake in startup hubs across Singapore, Hong Kong, Malaysia and Thailand. 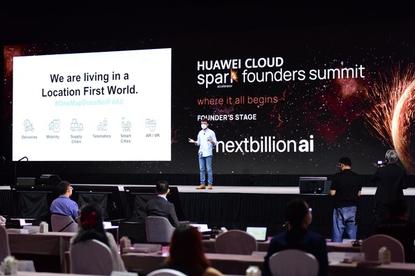 Huawei is set to develop new startup hubs in Indonesia, the Philippines, Sri Lanka and Vietnam as part of its plan to invest US$100 million in startup support across the Asia Pacific region.

The Chinese telco equipment vendor already has a stake in startup hubs across Singapore, Hong Kong, Malaysia and Thailand.

However, with the fresh investment pledge, announced at its recent Huawei Cloud Spark Founders Summit, the company is driving its APAC startup engagement ambitions further, with the funding going towards its Spark Program in the region, which aims to build a sustainable startup ecosystem for the region over the next three years.

The four new startup hubs are part of the initiative, as is an overarching aim of recruiting a total of 1,000 startups into the Spark accelerator program and shaping 100 of them into scaleups.

"Startups and SMEs [small- and medium-sized enterprises] are the innovators, disruptors and pioneers of our times,” said Huawei senior vice president and board member Catherine Chen. “Thirty-four years ago, Huawei was a startup with just $5,000 of registered capital.

“Recently, we have been thinking: How can we leverage our experience and resources to help more startups address their challenges? Doing so would allow them to seize the opportunities posed by digital transformation, achieve business success and develop more innovative products and solutions for the world,” she added.

The summit, held simultaneously in Hong Kong and Singapore, was also used to reveal the launch of Huawei’s Cloud-plus-Cloud Collaboration and Joint Innovation Program, designed to further ramp up its support for startups around the world.

Under the program, Huawei will devote ongoing efforts and leverage its complete business portfolio in the cloud collaboration space to foster technological innovation, global and local services and business ecosystems, accelerating the growth of startups.

"Since its launch in 2017, Huawei Cloud has been the world's fastest-growing cloud, and has driven the growth of countless startups,” said Zhang Ping'an, CEO of Huawei's Cloud Business Unit. “Last year, we launched the Spark Program in Asia Pacific.

“Through this program, we are working with local governments, leading incubators, well-known VC [venture capital] firms and top universities to build support platforms for startups in many regions. Now 40 startups are participating in our program,” he added.

According to Zhang, the launched of the Cloud-plus-Cloud Collaboration and Joint Innovation Program will see Huawei support startups with US$40 million worth of resources. Half of this investment is coming from Huawei Cloud, the other half from Huawei Mobile Services (HMS).

“In 2021, our plan is to support 200 startups in the HMS ecosystem and share our network of channel resources with developers worldwide who together serve 1 billion Huawei device users. In addition, we will open an HMS Developer Innovation Centre to support 100,000 HMS cloud-native developers,” Zhang said.

The investment comes as Huawei does its best to shake off a period of sustained criticism by several governments in various countries, most vocal of which has been the United States, over concerns about the security of its infrastructure products due to its perceived ties with the Chinese government.

Indeed, several countries around the world have banned Huawei from participating in the roll out of critical telco networks.

Huawei has consistently denied and rejected these accusations.

In 2019, the company confirmed it filed a complaint in the US federal court arguing that the ban the US government had imposed on its products went against its own constitution.