IBM and Samsung team up on unconventional, super-efficient semiconductor

By reorienting transistors on the semiconductor, vendors claim technology can cut power consumption by 85 per cent. 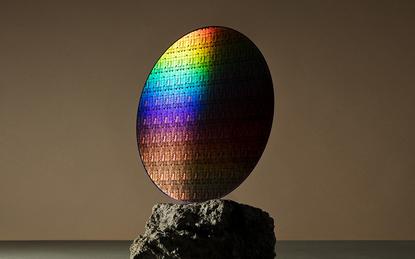 IBM and Samsung Electronics have designed what the tech giants call an unconventionally designed semiconductor that promises to reduce energy consumption by 85 per cent over existing chips.

The design would enable a ton of new applications including energy-efficient crypto-mining and data encryption but also cell phone batteries that could hold a charge for over a week instead of days without being recharged, companies stated.

The new semiconductor could also find its way into new Internet of Things (IoT) and edge devices that draw less energy, letting them operate in more diverse environments like ocean buoys, autonomous vehicles and spacecraft, the companies stated.

What’s new about the chip design is that its vertical-transport field effect transistors (VTFET) are built perpendicular to the surface of the chip with a vertical (up-and-down) current flow. With conventional chip technology, transistors lie flat on the surface of a semiconductor, with the electric current flowing laterally (side-to-side), according to a blog by Brent Anderson, VTFET Architect and Program Manager, and Hemanth Jagannathan, VTFET Hardware Technologist and Principal Research Staff Member.

“The VTFET process addresses many barriers to performance and limitations to extend Moore's Law as chip designers attempt to pack more transistors into a fixed space. It also influences the contact points for the transistors, allowing for greater current flow with less wasted energy,” the researchers stated.

VTFET addresses scaling barriers by relaxing physical constraints on transistor gate length, spacer thickness, and contact size so that these features can each be optimised, either for performance or energy consumption, the researchers stated.

“Moore's Law, the principle that the number of transistors incorporated in a densely populated IC chip will approximately double every two years, is quickly nearing what are considered insurmountable barriers,” the researchers stated. "As more and more transistors are crammed into a finite area, engineers are running out of space, but VTFET innovation focuses on a whole new dimension, which offers a pathway to the continuation of Moore's Law."

Intel this week said that it, too, was looking at vertical chip stacking as a way to continue developing semiconductors that grow with Moore’s Law.