Group plans to use proceeds from the IPO to support the company’s growth strategy. 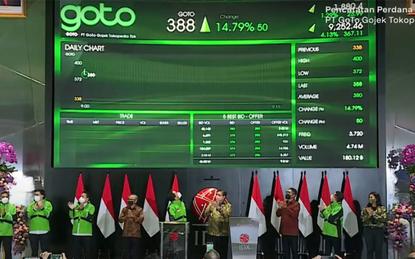 Indonesia’s GoTo Group, formed via the merger of Gojek and Tokopedia, has made its historic listing on the main board of the Indonesia Stock Exchange (IDX). The tech giant's shares soared by as much as 23% in its market debut.

The total funds raised for its initial public offering (IPO) was US$1.1 billion, making it the third largest in Asia and fifth largest in the world this year. The funds were made up of US$954.7 million in proceeds plus US$146.3 million from treasury shares for the purpose of over-allotment, representing a market capitalisation of approximately US$28 billion.

Around 300,000 investors participated to make the IPO a success. Growing demand for services across the group’s ecosystem, driven by increasing digital adoption among consumers in Southeast Asia, has underpinned their strong financial performance in recent years.

GoTo plans to use the proceeds from the IPO -- after deducting issuance costs -- for working capital to support the company’s growth strategy. This will be guided by four pillars focused on engaging and localising customer experience.

Firstly, the group aims to drive customer growth and engagement through cross pollination and by increasing usage among consumers, merchants and driver-partners. Next, plans are underway to prioritise the hyper localisation of its infrastructure to provide consumers with more convenience for their digital experience.

Lastly, they intend to invest in high growth areas, including deeper demographic expansion in Indonesia, Singapore and Vietnam, targeted strategic investments, investment in technology and infrastructure, and the transition towards electric vehicles.

“Today we embark on a new journey as a public company,” said Andre Soelistyo, CEO of GoTo. “Our listing on the Indonesia Stock Exchange will strengthen our ability to pursue our mission and better serve customers.

“Despite global market volatility, investor interest has been strong, reflecting the rapidly growing demand in Southeast Asia for our on-demand, e-commerce and financial technology services, as well as confidence in GoTo's position as the largest digital ecosystem in Indonesia.”

To make the IPO inclusive, GoTo has introduced the Gotong Royong Share Program, which will offer share ownership for driver-partners, merchants, consumers and employees. The company has allocated over $20 million to driver-partners and formed the GoTo Future Fund, an endowment fund that aims to support initiatives and solutions that benefit the lives of stakeholders across their ecosystem.

Additionally, merchants and consumers in Indonesia received priority access to order a fixed allocation of GoTo shares. Furthermore, as part of the program, all full-time employees have been made participants in the group’s long-term incentive plan.